self portrait in beijing

JOJIE ALCANTARA is a Filipina writer, photographer and artist whose online presence often gets mistaken for a male (her pet peeve is being called sir).

She started writing for a local newspaper in 1994 as a travel and lifestyle columnist (Witerary) until the present.  In 2010, she was invited to write a travel column (Scene Stealer) for a national paper.  Since 2006, she has been contributing articles and photos to several publications (national and international), and was also featured in newspapers and magazines.

But her journey started as an artist and performer at a young age.  She was into poetry, short stories, collecting books, dancing, singing, playing the piano, guitar, and even the banjo.  She took acting lessons and stage play at 16, just to gain self-confidence.

Her signs of artistry began very early… doodling at age 2 on walls and on Dad’s books,  sketching on blank papers, painting and writing poetry in high school.  She focused on caricatures (pen and ink and brush), and cartooning.  Her first caricature exhibit was in 2001, and another in 2004 with the Davao Artist Foundation.  She sketches and paints, and has been commissioned to do on the spot caricatures on special events. She didn’t pursue Fine Arts, however, and instead became an English Major grad.

She was dancing since age 7, from ballet, jazz, hula, punk, contemporary, and had her first “break” as a lady break dancer in the college campus (in a matinee show, she ripped her pants in the middle during a backspin).  She was also a dance choreographer and performed in production shows. Dancing was her first love, but took a back seat when her asthma worsened and she grew up sickly.

At 18, she started endorsing products and doing print and TV commercials on the side.  She had a forgettable stint in the runway from 1988 to 1997, both as a fashion model and a director/choreographer.  She then trained models and beauty contestants through workshops.  Back then, she had an incredibly anorexic weight of 108 pounds. Sadly, there were no traces of old videos or film photos of her shows.  Nor of that weight.

Her first short lived TV show was in 1995 where a singing contestant dropped his dentures on the floor while singing and she was right beside him, trying to ignore the moment. It was a feat that would train her into two other television shows in the future.

In 2003, she had a year’s hosting stint with a popular telemagazine show which was aired in Mindanao and TFC (The Filipino Channel) abroad.  It was called Halo Halo Sunday Special.

She then anchored for SkyCable’s live coverage of the Araw ng Davao parade (every March) and Kadayawan Festival (every August)  parades from 2001 up until 2012.  She also hosts events in the city.

Hello, Windows 95 and a fat monitor!

She got her first hard-earned computer in 1995 back when internet was new in Davao (Windows 95 and 98 were the coolest stuff, see photo above).  She even remembers to this day how a floppy disk works (and floppy isn’t as vulgar as you think).

She worked for a project in Manado, Indonesia for a few months, and started taking film photography.  This was after she up and left the corporate hotel work because she didn’t like the bundy clock.

A self-taught web designer in 1996, she was blogging when it wasn’t yet a household term while referring to it as “online diary”.  Her web was once finalist in the very early Philippine Webby Awards (1998) and have judged in online awards years after.  Her measly dialup net connection detached her from the world because they couldn’t get through her phone line.  She was once addicted to chat (and will now credit her amazing typing speed for it).

When she became a writer, she used a Pentax film camera in 1995, a digital camera in 1998, but only transitioned into a serious photographer in 2000 when she started documenting her travel adventures for her column.  She was the first media person in Davao to ever own a digital camera (Sony Cybershot with a whooping 1.6 megapixel) and a memory card of 32mb and128mb.  She tried to coax fellow female photographers to form a club because there were only few of them seriously out in the open then.

On her PC, she creates and conceptualizes graphic arts, animation, videos, webs, and artworks, so she loves to just stay home concocting stuff on the net.  That is, when she isn’t traveling and discovering remote places.

In 2000, after suffering from a failed relationship and juggling with a fear of heights, sea, commitment, enclosed spaces, open spaces, ghosts, dark corners, stepping on sidewalk cracks, crowds, what have you …. something must have triggered and gone haywire in her head for like the mythical phoenix, out of the ashes of that pathetic timid, phobic girl arose this crazy, fearless woman who craves aerial shoots (she rode a chopper through stormy weather that made an emergency landing on the rice terraces), balances herself in small boats, collects Asian horror films, and bravely joins parades.  She is still claustrophobic in elevators, though she went caving.

When she became active in promoting tourism, invitations started pouring in to visit places and write about them.  Sometimes she went with a group of media people, most times she was alone. She eventually evolved from a lifestyle writer to a travel writer and photographer.  She gets to fly to places around the Philippines, eventually in other countries, stay in very nice hotels, explore the culture and local flavors, then goes back to reality when she gets home and writes about the awesome experience.  That normally means sorting through a thousand images per day, too. 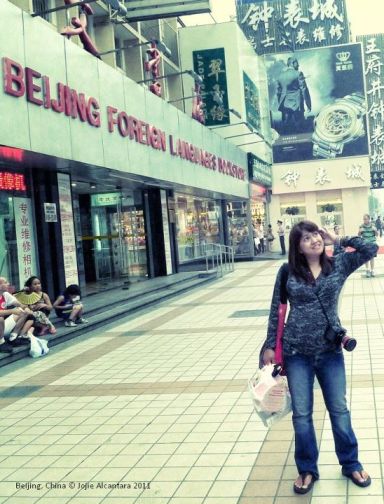 Lost in translation in Beijing

There were sad times she had to turn down invitations (Egypt, Dead Sea, Petra in Jordan, South Korea, and the recent trip to go back to Indonesia after 10 years — aargh) due to unforeseen events that tied her to schedules or activities, or lack of budget thereof.  Eventually, though, another trip would come sooner or later which made up for the missed journeys.

After a series of Sony point and shoots, she finally had her first DSLR (a Canon 350D) in 2006.  Today, she uses a Canon 5D, 7D, and a 5D Mk II, with small backup cameras are the Panasonic Lumix and Olympus Pen.  You can now imagine how heavy her bags can get. 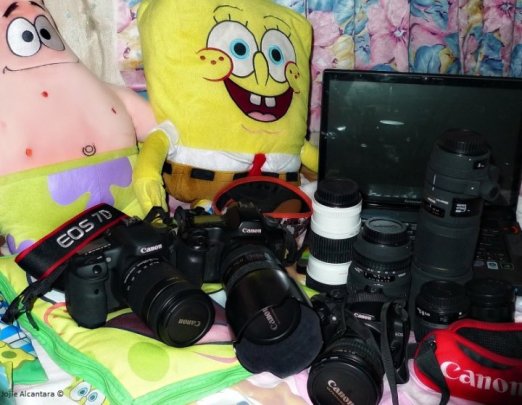 Jojie’s gears and other collection

Today, armed with cameras, dental floss, asthma inhaler, and reckless bravado, she discovers exciting, remote places in her personal quest to promote the islands of the Philippines, particularly Mindanao.

Her photo was recently published as cover of  an international magazine (May 2011 issue).  She loves to do aerial photography.

documenting a pod in Dahican waters

In January 2010, she won a Grand Prize in an international photo competition (BetterPhoto.com), for this photo.  🙂

While she has television stints and public hosting gigs, most of her fulfilling moments are quietly capturing nature, landscapes, or documenting people and events.  She accepts projects on commission.

Lost in her own world – Beijing, China

She has had several photo exhibits in Davao and Manila, most notable of which was Bravo Filipino! in Manila for the Ayala Foundation which featured a traveling exhibit together with six respected photographers that included Don Jaime Zobel and  actor Piolo Pascual.

This solo traveler is inspired by experiences in life, views failures and mistakes as minor setbacks, and constantly reinvents herself as she moves on (but the baby bangs stays).

Clothes and red shoes by DC, with her four dogs

Jojie during a shoot

A non-corporate, nonconformist freelance person, she prefers to wear jeans with her signature Michael Jackson shirt (big collection), until such time she stops mourning for his loss.  She is caught up in an 80s time warp, sans the glittery hair gel.

In 2006, her collection of funny signs went viral globally among Pinoy communities, with her website featured in TV talk shows, and eventually high traffic prompted it to crash.  She plans to launch her new collection in another blog soon.

In June 2011, her home was damaged by a flash flood that hit the family hard.  Her most cherished possessions were all wiped out — clothes, furnitures, large collection of books, family albums, hoarded items, etc.  Her family (which includes four dogs) managed to escape the disaster (“it was like a scene from a bad Steven Spielberg movie”).  They’ve since moved into a new home, but the incident still traumatizes her.  She still remains to be her cheerful, crazy self, though (and is forever grateful to those who rushed to help emotionally, spiritually and materially).

She views life comically or in moments like these, with a gentle sense of humor, as part of her survival instinct.

These days, she still follows a crazy schedule, but does not go out much when she’s not doing workshops, attending events, or on travel assignments (and only if you tell her there’s this unexplored island with cool cannibals off the coast of, never mind).  She continues to blog, and may be more visible online than ever likely showing up in public.  Otherwise, it’s the lure of traveling alone, discovering some place new that always pulls her out of her “cave”. 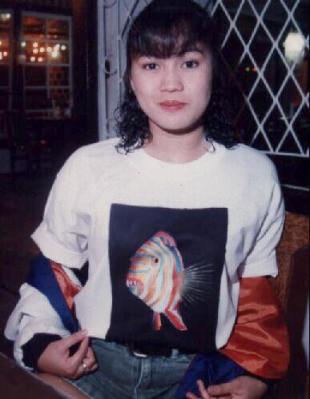 Jojie and her handpainted shirts in 1995

One day soon, she wants to go back to painting again. (She keeps a blank canvas, unused sets of watercolor and fine paintbrushes in her closet and checks on them from time to time, runs her hand on the white sheet, smells the paints obsessively… you get the picture).

This photo was taken before the flood.  All the shirts survived, but you can send her MJ shirts to add to her growing vintage collection and to make her deliriously happy.

She just gave you a fast forward rundown of her life (that headache will come and go, not to worry, it happens to her friends).  Most of it except the juicy details, anyway.  She still lives simply until now.  She hopes through this blog, you will be inspired to live life fully as well and share your blessings with others.

Thank you for actually scrolling down with interest at what I have to say (I always feel the need to explain my being a complex person, A LOT).  Below are random stuff I went into but which doesn’t require much reading. 🙂

View her other adventures, blogs, and online portfolio in the links above.

FEATURED PHOTOGRAPHER OF THE WEEK IN MANILA BULLETIN’S PICTURE PERFECT ON FEBRUARY 16, 2010

Endorsements  (or companies who believe in me) 🙂

Thank you for your time and interest,