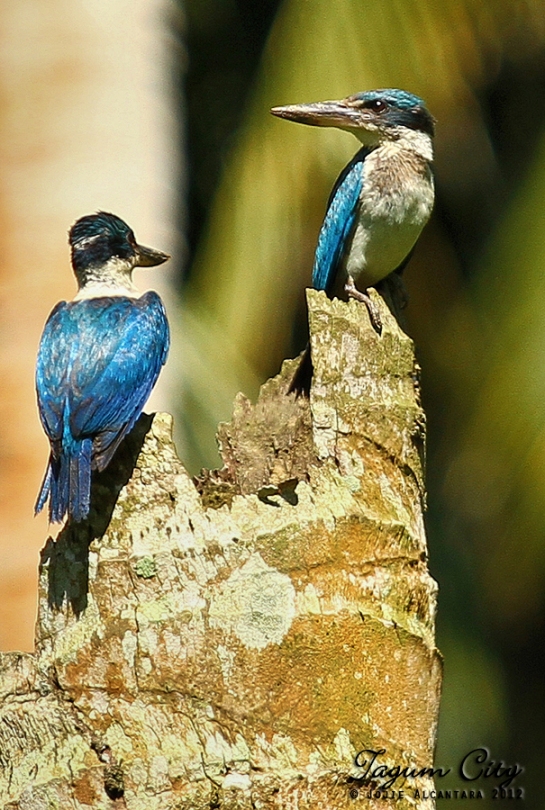 The Collared Kingfisher (Todiramphus chloris) is a medium-sized kingfisher belonging to the family Halcyonidae, the tree kingfishers. It is also known as the White-collared Kingfisher or Mangrove Kingfisher. It has a wide range extending from the Red Sea across southern Asia and Australasia to Polynesia. It is a very variable species with about 50 subspecies.

It is most commonly found in coastal areas, particularly in mangrove swamps and also inhabits farmland, open woodland, grassland and gardens. In some parts of its range, especially on islands, it can be seen further inland, ranging into forest or into mountain areas. Birds often perch conspicuously on wires, rocks or bare branches. (source: internet)

I captured these birds inside the banana plantation of the vast Hijo Estate which is also home to the posh and private Lanikai Resort in Tagum City, just an hour away from my city of Davao.

A day’s tour inside the huge estate offers you family activities from kayaking, swimming to horseback riding.  The plantation tour historically educates you on being the first banana plantation in the country to have exported fruits in Japan years ago.  The forest tour will open your world to wild pigs, birds and monkeys freely roaming in the woods, while a high canopy walk will challenge your fear of heights as old giant trees surround you, still existing within the well-maintained private sanctuary.

Read more in my featured story, The Boom in Tagum

Ramen and childhood memories. Bonding with sis in our old neighborhood.
Good intentions, grateful heart. Glad to be here at the right moment. 🙏❤️
"Letting go gives us freedom, and freedom is the only condition for happiness. If, in our heart, we still cling to anything - anger, anxiety, or possessions - we cannot be free."
"Those who contemplate the beauty of the earth find reserves of strength that will endure as long as life lasts. There is something infinitely healing in the repeated refrains of nature — the assurance that dawn comes after night, and spring after winter.” —Rachel Carson